The original church of 1878 was covered by polychromatic designs on the ceiling and walls and had a very different chancel arch and cross. The latter had to be dismantled because of subsidence. The present Rood hides a steel girder literally holding the north and south walls together! The original stone cross is now set in the outside wall below the east window (the Queen’s Road side of the building). The ceiling and wall decoration was whitewashed in 1904. 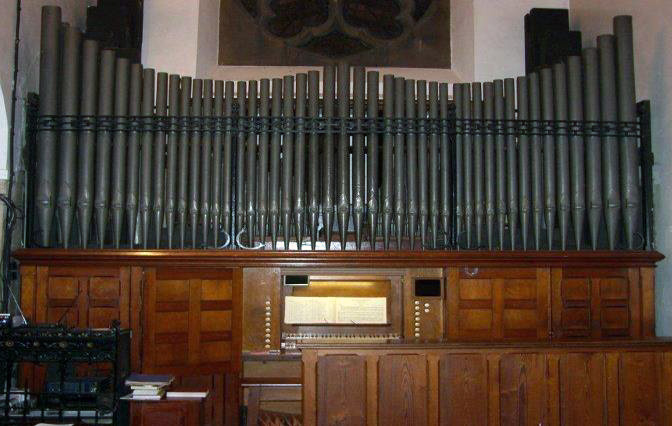 Apart from choosing one of the finest architects of his day, Sir Arthur commissioned ‘Father’ Willis, perhaps the greatest organ builder of his day, to create the instrument we see here. Being relatively small, just two manuals with pedals, it is ideally suited to the building and of great tonal quality.

The icons you see in the north and south aisles were commissioned in 1997 and painted by a Greek Orthodox monk, Aidan Hart. Each one depicts a major event in the life of Jesus and His Blessed Mother.

The stained-glass windows in both aisles are important examples of late nineteenth and early twentieth century art. Their subjects are (from the organ anticlockwise):

These windows - those in the north aisle and the window of ‘Christ the Good Shepherd’ above the Lady Chapel altar - are believed to be by the leading Victorian/Edwardian firm, Heaton, Butler and Bayne.

The Lady Chapel is a later addition to the church and is dedicated in honour of our Lady, the Blessed Virgin Mary. Of particular interest is the stained-glass window of the Annunciation on the south side. The kneeling priest is Fr Adams, a former Vicar of St John’s.

The great west window (again by Heaton, Butler and Bayne) depicts the Transfiguration of Christ, with scenes of the four Gospel writers and the Last Supper. The wall beneath was, until recently, whitewashed but its restoration was a part of the work carried out in 2002.

The chancel screen by C S Hare is particularly magnificent as it does not detract from the beauty of the high altar area beyond. 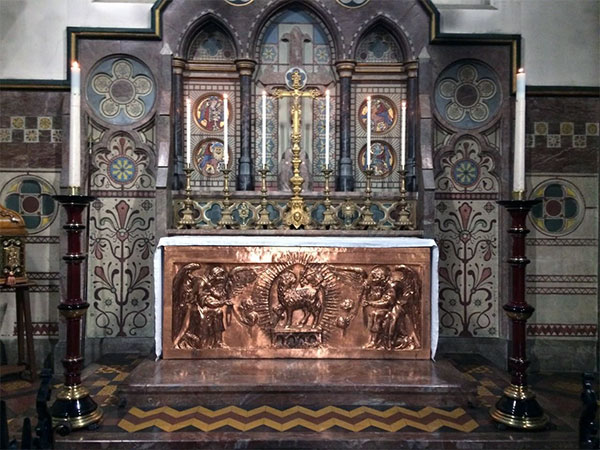 The high altar copper frontal of the Adoration of the Lamb was placed here in 1911 and is by Barkentin and Krall. It is a very significant work of art and design. The magnificent stained-glass window above the high altar features scenes of the Ascension of Christ, surrounded by scenes of the Nativity (left) and the Baptism of Christ (right), with the Blessed Virgin Mary and the Archangel Gabriel (the Annunciation) in the two lights of the tracery above; while the Lamb of God (Agnus Dei) occupies the central and highest opening in the tracery.

Above the sedilia there is a depiction of our Lord’s resurrection appearance at Emmaus. The two pottery candlestands in front of the high altar are Eltonware and have recently been restored. To the left of the altar stands a tabernacle - a safe in which consecrated bread and wine are ‘reserved’ - this is the central focus of Christ’s presence and a place to pray quietly before the Blessed Sacrament of the Lord’s Body and Blood.

Thank you for your generosity!
Fr Brendan Clover
Parish Priest

For the first time since 2019, the Summer Fete will be going ahead in the Church grounds on…

Come and enjoy the glorious sound of three…

If you are worried about attending a service in person due to Covid, please be assured that we have a robust and dynamic risk assessment procedure in place with track and trace (including QR codes for the NHS track and trace app), social distancing measures, sanitising stations, one way systems and PPE equipment available. In recognition of our Covid control measures, we have achieved accreditation under the Government's 'GOOD TO GO' scheme.